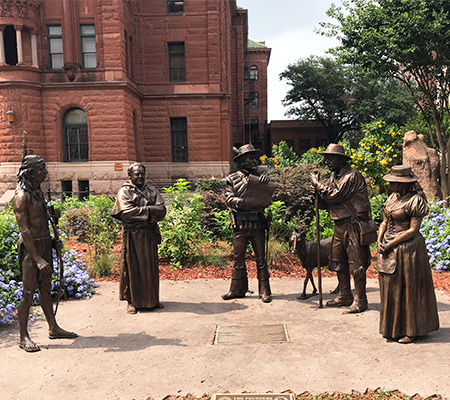 The figures in this monument, created by Laredo artist Armando Hinojosa, represent the four founding communities of San Antonio - American Indians, Franciscan friars, Presidio soldiers, and Canary Islanders.  As early as 1691, Spanish explorers recorded insightful information on various American Indian tribes in the area, whom the Spanish collectively referred to as the Coahuiltecans. Later tribes included the Lipan Apaches, the Tonkawa, and the Comanches. Colonial settlement began in 1718, with the establishment of the Presidio San Antonio de Béxar and the Mission San Antonio de Valero (now called The Alamo).

In 1731, Spanish immigrants from the Canary Islands, (Spain) settled in the area and formed the first organized civil government in Texas, founding the village of San Fernando de Bexar adjacent to the presidio. The mission, presidio and villa communities worked hard to maintain their individual identities but eventually began the process of working together to achieve mutually beneficial outcomes. Through marriage and business ventures, the soldiers, mission natives and Canary Islanders joined together to form a solid foundation that would persevere through many tests and conflicts.

The monument located in front of the historic Bexar County Courthouse in the heart of San Antonio. This area is commonly referred to as Main Plaza but for hundreds of years it was known as Plaza de las Islas Canarias.

Photo: The Founders Monument as it stands in front of the historic Bexar County Courthouse.