About the County Clerk

This walking tour takes you on a trip through downtown San Antonio, centered around Main Plaza and explores the history of the buildings and the location of the area. To start, head to the Bexar County Courthouse at 100 Dolorosa, 78205 (marked 1 on the map). James Riely Gordon (1863-1937), an architect of public buildings throughout the United States for some 72 courthouses throughout Texas and the United States, the Arizona State Capitol, and other notable edifices, won a competition to build the Bexar County Courthouse here at its present location. Erected in distinctive Romanesque Revival style in Texas granite and red sandstone, the cornerstone was initially laid in 1892. Work continued on the building until 1897. Numerous alterations and additions were made to the structure, but recently these were stripped away to restore the original façade. The building is thought to be the largest and oldest continuously operated historic courthouse in Texas.

More history of the Courthouse: 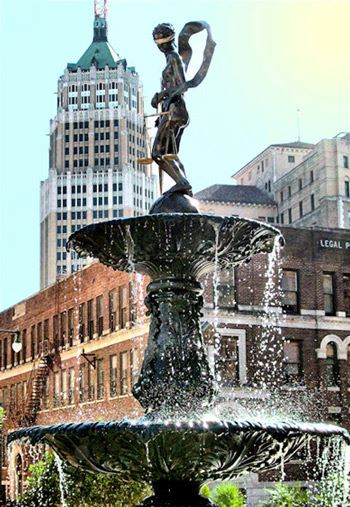 Facing Main Plaza/ Plaza de las Islas to the north is the 1896 Lady Justice fountain. Originally located in an east courtyard of the Courthouse until its removal in 1927, this allegorical figure of the Roman goddess Ivstitia is blind, holding balance scales to represent impartiality, and a swift sword—emblematic of authority, the final arbiter. Her “maidenly form” is another attribute evoking fairness and impartiality. She and Lady Liberty are frequent feminized allegories in American art. The statue returned to its present location at the north entrance of the courthouse in 2008. 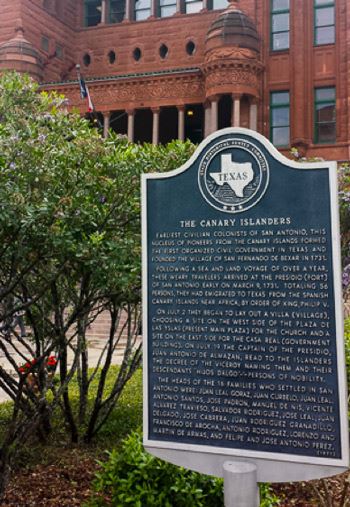 West of the Lady Justice statue and fountain is the Canary Islander/ Isleño marker. Philip V of Spain and his viceroys conceived a plan to settle the far frontier presidio and Franciscan Mission district of San Antonio de Béxar with settlers from the Canary Islands, a Spanish possession off the coast of North Africa. Following a lengthy sea voyage to the port of Veracruz by way of Havana, Cuba, the settlers then proceeded overland from Cuautitlán, Mexico, arriving here by March 9, 1731 to establish the Villa de San Fernando. These civilian colonists established the Plaza de las Islas to the east of the presidio’s Plaza de Armas or Military Plaza. The San Fernando Church would be laid out between the two plazas, and opposite of the Church would be the Casas Reales or ayuntamiento and government buildings. There are many interpretive pavers for you to find and read different impressions from various epochs in Main Plaza.

For the next item of the tour, turn away from the courthouse to face Main Plaza. Then, continue reading. 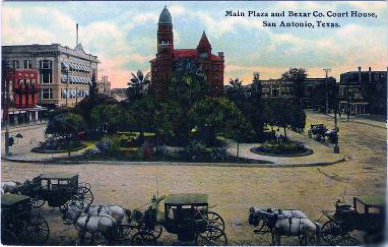 With the augmenting of the presidio of San Antonio de Béxar and the Franciscan Mission San Antonio de Valero (aka the Alamo) across the San Antonio River by civilian settlement, the Canary Island families arranged their homes around this plaza as a center of Church affairs, civil government, and markets. In 2007, the City of San Antonio closed the portions of N. Main St. and E. Main Plaza at the east and west sides of Main Plaza, and built the present urban park to restore it as a central public space and gathering locale for residents and visitors.

Main Plaza is also the site of the sureender of Federal Forces by General David Emanuel Twiggs. By February 1861, a month before Abraham Lincoln’s inauguration as sixteenth President, the secession of Texas from the Federal Union was nigh. South Carolina, Mississippi, Florida, Alabama, Georgia, and Louisiana had seceded in December 1860 and January 1861. Fully 1/5th of the U.S. Army manned various frontier forts and posts in West Texas. They received supplies from the Quartermaster’s warehouses and mule trains in San Antonio. Pro-secessionist militia, future Confederate Texas troops, disarmed and detained the U.S. troops commanded by General David Emanuel Twiggs, a Georgian by birth, decorated in the War of 1812 and the U.S.-Mexican War, 1846-1848. Twiggs surrendered his command, and over a million dollars in Federal property with it on February 18, 1861. 2,600 troops were to evacuate Texas by sea, although by the time some arrived from the more remote garrisons, hostilities had commenced at Fort Sumter in April 1861. The latecomers were imprisoned as prisoners of war in Tyler. Twiggs was cashiered from the army for his actions, briefly serving the CSA as a general before his death in 1862.

Continuing the tour, proceed across Dolorosa and head for the middle of Main Plaza by the fountains. Face San Fernando Cathedral and keep reading.

This painting by William G.M. Samuel shows a raucous scene of how the west side of the Plaza looked in 1849, with working vaqueros/cowboys pursuing calves; ox carts laden with goods and produce; mules, donkeys, and horses; dogs; a stage coach; various market stalls; and in the middle background, San Fernando Church as it appeared after 1755, long before the present-day mid-19th century French neo-Gothic façade was added. The rear of San Fernando Church is most closely how the religious institution would have appeared historically. Former soldier in wars with Mexico and with Indians, William G.M. Samuel painted four canvases showing buildings as they once appeared and also captured a number of important historical details.

The acequia principal, or primary irrigation ditch of the Canary Island settlers, was dug across the western margin of Main Plaza. To the south of the Cathedral is a restaurant today. Historically the homes of Igancio Flores and Francisco were located there. At the time the scene was painted, hides and wool warehouses operated on the southwestern corner of Main Plaza and Dolorosa St. By the late nineteenth century, the Southern Hotel occupied the site. Across Dolorosa Street, where today the Cadena Reeves Justice Center, stands lay the homes of Pedro Flores and Vicente Cabrera. Today, there is the Municipal Plaza Building with the Chamber of the City Council in the Old Frost Bank Building of 1922 located just north of the San Fernando Cathedral at 114 W Commerce. During the Spanish colonial period the residences of Toribio Fuentes and Francisco Barrera were there, around the western portion of the Main Plaza. 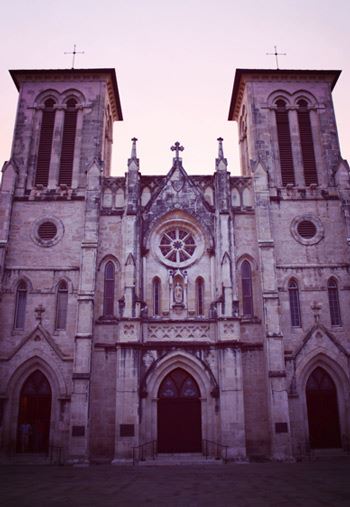 A neo-Gothic addition enlarged the original colonial-era Church by the mid-to-late 19th century. First completed with a single bell tower on the southeastern corner near the eastern entrance in 1744, it remains the oldest cathedral sanctuary in the United States. A small sarcophagus with human remains found under the floor—purportedly 1836 Alamo defenders—is situated there in the southeast of the Cathedral today. The western part of the Cathedral, which today boasts a statue of Nuestra Señora de Guadalupe and Saint Juan Diego to whom she appeared at Tepeyac, was where all distances were formerly measured in the city. 7. Statue of Saint Anthony of Padua

Portuguese-born Franciscan friar, Fernando Martins de Bulhões (1195-1231), better known as Saint Anthony of Padua in Italy where he died at 35 years of age, is the namesake of the Yanaguana River, and thus of the city that grew from the military presidio founded in 1718, the five Franciscan Missions, and the 1731 Villa de San Fernando. He was canonized less than a year after his death in 1232 by Pope Gregory IX. During the entrada of Spanish soldiery and Franciscan missionaries in 1692, the Franciscans under chaplain Damián Massanet renamed the Payaya Indian Yanaguana River after San Antonio because their safe arrival coincided with his June 13 Saint’s Day.

The statue was placed in Main Plaza in 2009, proximate to the Cathedral. Located at 114 W Commerce St., the City Council Chamber and City municipal offices have occupied this building designed by the architecture firm of Sanguinet and Staats since the early 1970s. There are several intriguing details of this building, which served as the headquarters of the 1868-est. Frost National Bank. Notice the old Buffalo nickels that appear in relief between the windows. There are several historical markers affixed to the exterior wall. T.C. Frost (1833-1903) from Alabama came to Texas in 1855, where he briefly served as a Texas Ranger, before founding a law firm. Frost served the CSA as an officer, and operated a freight business too. The 1922 building was built atop the site of his original mercantile company and warehousing business.

Enjoy walking or self-guided tours? Use these resources to learn more about Bexar County and explore it on your own.

"Records on the Run" Mobile Unit