Bexar County was created on December 20, 1836, and encompassed almost the entire western portion of the Republic of Texas. This included the disputed areas of western New Mexico northward to Wyoming. After statehood, 128 counties were carved out of its area.

The county was named for San Antonio de Béxar, one of the 23 Mexican municipalities (administrative divisions) of Texas at the time of its independence. San Antonio de Béxar—originally Villa de San Fernando de Béxar—was the first civil government established by the Spanish in the province of Texas. Specifically, the municipality was created in 1731 when 55 Canary Islanders settled near the system of missions that had been established around the source of the San Antonio River. The new settlement was named after the Presidio San Antonio de Béjar, the Spanish military outpost that protected the missions. The presidio, located at the San Pedro Springs, was founded in 1718 and named for Viceroy Balthasar Manuel de Zúñiga y Guzmán Sotomayor y Sarmiento, second son of the Duke of Béjar (a town in Spain). The modern city of San Antonio in the U.S. state of Texas also derived its name from San Antonio de Béjar. 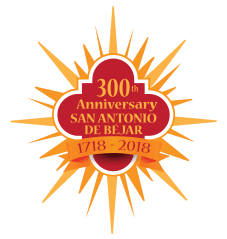 The Yanaguana river valley, populated for millennia by seasonally migrating, non-sedentary Native American Indians, had gained recognition from Spaniards Domingo Ramón and Fray Antonio San Buenaventura Olivares during prior exploration as a superb site for settlement.

Viceroy Baltasar de Zúñiga y Guzmán, Duke of Arión, Marquis of Valero (1658-1727), seeking to push the pale of settlement in New Spain northward and contest Lépai-Nde/Lipan Apache resistance and French imperial claims to nominally Spanish territories, ordered Martín de Alarcón as governor of the Province of Texas to establish a military presidio at the site. He was to assist with the establishment of Franciscan Missions, and provide a way station for supplies to Missions and Presidial troops in east Texas much closer to French Louisiana.

Two Franciscan padres, Fray Francisco Céliz and Fray Pedro Pérez de Mezquía kept diaries of this foundational expedition that established the Villa y Presidio de San Antonio de Béxar, and with it, the Bexar District. Thus, while Spaniards had named the Yanaguana the río San Antonio in a previous expedition, 1718 marks the formal establishment and effective settlement, which we acknowledge and celebrate as the founding.

This was the acorn from which the tall live oak would grow: Today San Antonio is the 7th largest city in the nation, and the 2nd city of Texas while Bexar County is the fourth most populous in Texas and the 17th in the United States. The City of San Antonio with its five Missions and the County of Bexar celebrated the 300th anniversary in 2018 of this founding!

Learn more about Bexar County's history by exploring these topics:

Learn more about the history of Bexar County by reviewing maps of San Antonio Missions and Presidio in 1764, learn about the town of Béjar that was the origin of Bexar County's name, and the colonial governors and viceroys of the Spanish province of Texas in the Viceroyalty of New Spain from 1691 through 1835.

Map of San Antonio Missions and Presidio in 1764

The orientation of the map is east-west, with the San Antonio River at top and Medina River on right. Shown also are the Caminos Reales (Royal Roads) and crossings on the Medina River just southwest of San Antonio. Spanish explorers and missionaries traveled on this important transportation and commerce corridor stretching from San Antonio to points along the Rio Grande River. Source: Texas Beyond History 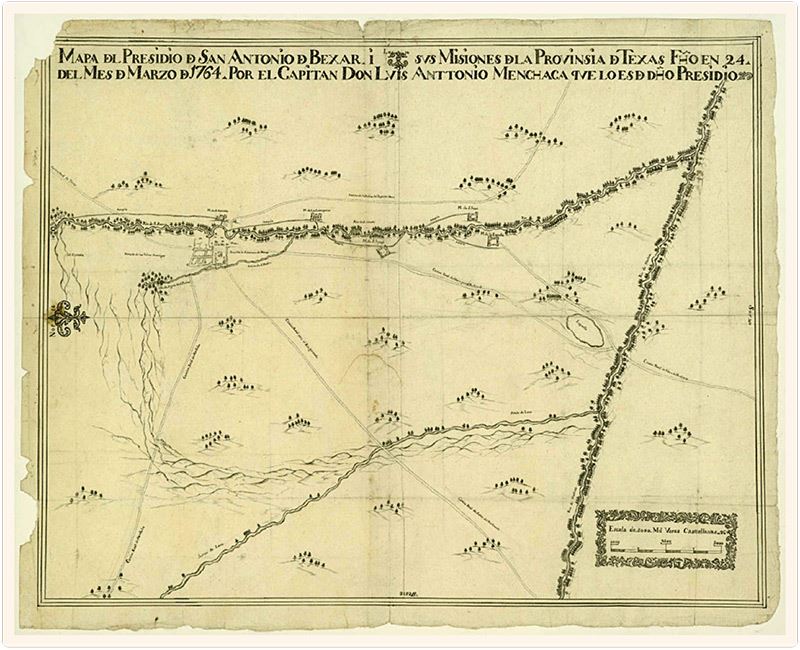 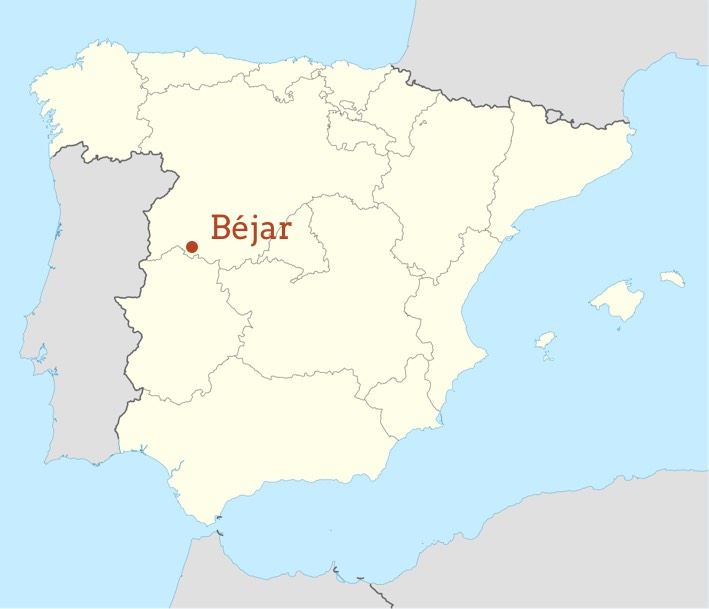 Béjar is a town and municipality in the province of Salamanca, western Spain, part of the autonomous community of Castile and León. It lies 72 km (45 mi) and has a population of 15,016 as of 2007.

The first inhabitants of what is now Béjar were the Vettones who settled an area to the south of the city now known as La Antigua around 400 BC. The city formed part of Roman Hispania in the beginning of the 1st century BC. In AD 713, the city was taken by Muslim Berbers (Moors) from the Visigoths and in the 11th century it was conquered by King Alfonso VI of Castile. Following this, the walls, part of which still stands, are constructed to repel frequent Arab incursions that took place until the definitive conquest. The city was later the center of the Duchy of Béjar ruled by the powerful House of Zúñiga.

The name Béjar is of pre-Roman origin. The original form was Bigerra and is said to mean "place of the beehives." "Béjar" could be an adaption from the Spanish word abeja, which means "bee." An older spelling of the city's name is Béxar. In medieval documents, Vexar is found also.

Bexar County acquired its name indirectly from this city.

This list includes the governors of the Spanish province of Texas in the Viceroyalty of New Spain from 1691 through 1835. After the Mexican War of Independence ended Spanish control of the area in 1821, the "Mexican province of Texas" became part of the newly formed country of Mexico.

Governors of Texas During the Mexican Empire

Governors of Coahuila and Texas

This list includes the viceroys of the Spanish province of Texas in the Viceroyalty of New Spain from 1688 through 1787 during Spanish sovereignty in Texas.