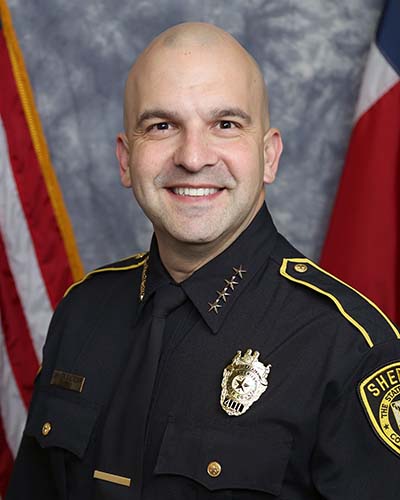 Bexar County Sheriff Javier Salazar was sworn into office on January 1, 2017. Prior to being elected, Sheriff Salazar served with the San Antonio Police Department (SAPD) for twenty-three years.

Sheriff Salazar joined the SAPD at the age of 21, first as a patrolman, then in Downtown Bike Patrol as well as one of the first members of the SAFFE Unit. He promoted through the ranks of the SAPD and served in Narcotics, the Executive Protection Detail and the office of the Chief. He then became an Internal Affairs Investigator and in 2012 served as the Director of Communications. His last assignment at the SAPD was Director of the Department’s Integrity Unit.

He has been married to his wife Sarah for nineteen years and is the proud father of two daughters.