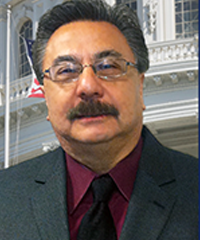 MIKE LOZITO was born in Yokohama, Japan. He graduated from Andress High School in El Paso, Texas. Mr. Lozito's father was a retired Army Officer and settled in the El Paso area, his dad later became the Chief Probation Officer in El Paso County. This led to Mr. Lozito's passion for Criminal Justice; he graduated from St. Edward's University in Austin with BA in Criminal Justice.

His previous employment includes over 30 years Criminal Justice experience; as a Pretrial Technician, Youth Services Officer, Parole Officer, Parole Supervisor, Section Director and Regional Director. A large portion of his career was with the Texas Department of Criminal Justice. Mr. Lozito has also worked in the private sector as an Account Executive and Business Development Manager. He is known for his expertise in Day Reporting Centers, Sex Offender Programming and Electronic Monitoring Technologies. He was acknowledged by the Texas Corrections Association as the "Outstanding Adult Corrections Administrator" for 2008. He was married in 1989 to his wife Nelda and they have a daughter Gabriella. Mr. Lozito also has children from a previous marriage, Michael, Carie, and Tony. Mr. Lozito enjoys volunteering with his daughter's school and is past President of the PTC. In 2011, he received an award from the San Antonio Catholic Archdiocese for his work as a volunteer. His hobby is playing music and he has played with several bands in the San Antonio area.

Mr. Lozito began his career with Bexar County in June 2010, as the Judicial Support Services Manager responsible for the Pretrial Services Office and Indigent Defense Attorney Appointments. In August of 2011, he was named as the interim Director of Judicial Support Services and was appointed as the Director of Judicial Services in November 2011. He is responsible for administering the activities of the Pretrial Services Office, Jail Population Impact Control Unit, Medical Examiner's Office, Crime Investigation Laboratory, Court Collections, Problem Solving Courts Programs, Reentry Services, and the Dispute Resolution Center.