The mission of the Bexar County Family Drug Court is to provide services to families separated by the effects of alcohol and drug abuse and to use the power of the Courts to bring the community together, helping parents to recover from addiction, and appropriately care for their children. 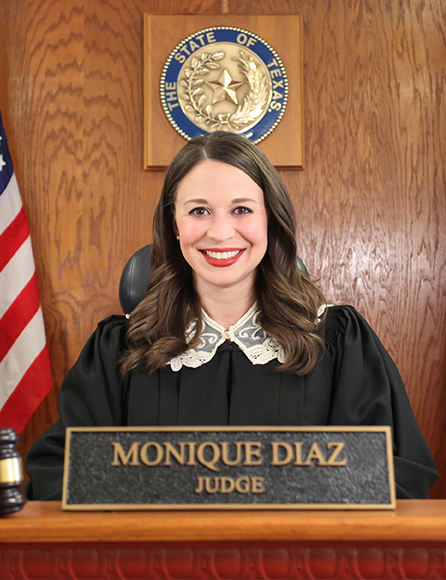 Monique Diaz is a San Antonio native. She and her two brothers were raised by their Puerto Rican mother and Dominican father. Monique earned her undergraduate degree in Sociology from the University of Texas at Austin, and her law degree from St. Mary’s University School of Law. Prior to being elected to the bench, Monique owned and operated her own law firm for nearly a decade, where she represented low-income families, victims of domestic violence, civil litigants and small businesses. In the public sector, she represented non-profit and government agencies, and served as a City Attorney and City Prosecutor for municipalities statewide. In 2018, Monique was elected to the bench as Judge of the 150th Civil District Court in Bexar County where she presided over all civil matters. She currently serves on the Bexar County Juvenile Board, and is Co-Chair of the joint city-county Collaborative Commission on Domestic Violence.